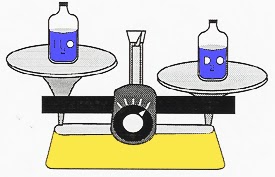 Heavy water contains heavy hydrogen, or deuterium, instead of normal hydrogen.  Deuterium is the stable, nonradioactive isotope of hydrogen with atomic weight 2.01363 and symbol D, or 2H. It is commonly called heavy hydrogen because its atomic weight is approximately double that of ordinary hydrogen, but it has identical chemical properties. Deuterium has about twice the atomic weight of normal hydrogen because its nucleus contains a proton and a neutron, instead of just a proton. Hydrogen as it occurs in nature contains approximately 0.02 percent of deuterium. The boiling point of deuterium is -249.49° C (-417.08° F), or 3.28° C (5.90° F) higher than that of ordinary hydrogen. Heavy water (deuterium oxide, D2O) boils at 101.42° C (214.56° F) as compared to 100° C (212° F), the boiling point of ordinary water. It freezes at 3.81° C (38.86° F) as compared to 0° C (32° F) for ordinary water. Its density at room temperature is 10.79 percent greater than that of ordinary water.

Deuterium, which was discovered by the American chemist Harold Urey and his associates in 1932, was the first isotope to be separated in a pure form from an element. Several methods have been used to separate the isotope from natural hydrogen. The two processes that have been most successful have been fractional distillation of water and a catalytic exchange process between hydrogen and water. In the latter system, when water and hydrogen are brought together in the presence of a suitable catalyst, about three times as much deuterium appears in the water as in hydrogen. Deuterium has also been concentrated by electrolysis, centrifuging, and fractional distillation of liquid hydrogen.

The nuclei of deuterium atoms, called deuterons, are much used in research in physics because they can be readily accelerated by cyclotrons and similar machines and used as “atomic bullets” to transform an atom of one element into another element. Deuterium also has important uses in biological research as a tracer element for studying problems of metabolism.

Regular hydrogen and deuterium are not normally metallic, meaning they are not shiny or malleable. Scientists have used pressure and heat, however, to force deuterium to act like a metal, making it shinier and easier to compress. In 1998, scientists announced that they had used lasers to shock a sample of deuterium, compressing it and heating it enough that it behaved like a metal. Studying deuterium in these conditions can help scientists understand how hydrogen behaves in the hot, heavily pressurized interiors of planets such as Jupiter and Saturn and in the interiors of stars such as our Sun.

The use of heavy water as a moderator in atomic piles was suggested during World War II but in the first U.S. piles, graphite was employed instead. Deuterium, either in deuterium oxide or in lithium deuteride (LiD), and tritium are essential components of nuclear fusion weapons, or hydrogen bombs. (Encarta Encyclopedia)