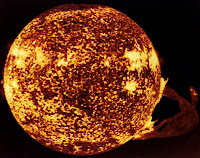 Besides providing light and heat, the Sun affects the Earth through its ultraviolet radiation, the steady stream of the solar wind, and the particle storms of great flares. The near-ultraviolet radiation from the Sun produces the ozone layer, which in turn shields the planet from such radiation. The soft (long-wavelength) X rays from the solar corona produce those layers of the ionosphere that make short-wave radio communication possible. The harder (shorter-wavelength) X-ray pulses from flares ionize the lowest ionospheric layer, producing radio fadeouts. The Earth's rotating magnetic field is strong enough to block the solar wind, forming the magnetosphere, around which the solar particles and fields flow. On the side opposite to the Sun, the field lines stretch out in a structure called the magnetotail. When shocks arrive in the solar wind, a short, sharp increase in the field of the Earth is produced. When the interplanetary field switches to a direction opposite the Earth's field, or when big clouds of particles enter it, the fields in the magnetotail reconnect and energy is released, producing the aurora borealis (northern lights). Big flares or coronal mass ejections bring clouds of energetic particles that form a ring current around the magnetosphere, which produces sharp fluctuations in the Earth's field called geomagnetic storms. These phenomena disturb radio communication and produce voltage surges in long-distance transmission lines and other long conductors.

Perhaps the most intriguing of all terrestrial effects are the possible effects of the Sun on the climate of the Earth. The Maunder minimum seems well established, but there are few other clear effects. The only other definite relationship is the temperature change associated with the quasi-biennial oscillation of the tropical stratospheric wind. The brightness of the Sun varies with activity; a large sunspot reduces emission by an amount corresponding to its area. The effects of plages produce an overall increase in the solar flux by about 0.1 percent, however, when spot activity increases. This is a negligible effect, and so particle effects and fluctuations of ultraviolet radiation in the stratosphere are thought to be important.

Because charged particles follow magnetic fields, corpuscular radiation is not observed from all big flares but only from those favourably situated in the Sun's western hemisphere. The solar rotation makes the lines of force from the western side of the Sun (as seen from the Earth) lead back to the Earth, guiding the flare particles there. These particles are mostly protons because hydrogen is the dominant constituent of the Sun. Many of the particles are trapped in a great shock front that blows out from the Sun at 1,000 kilometres per second. The flux of low-energy particles in big flares is so intense that it endangers the lives of astronauts outside the terrestrial magnetic field. (Encyclopedia of Britannica)