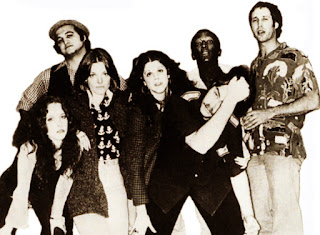 Staying home to watch TV on Saturday night was no longer a shameful admission, thanks to Saturday Night Live. Within months of the show's October debut, it was far worse to admit missing the zany comedy. Everybody assembled at the watercooler or outside the classroom Monday morning was exchanging lines from the hilarious skits. The roster of players read like a comedic Who 's Who: (left to right, below) Laraine Newman, John Belushi, Jane Curtin, Gilda Radner, Garrett Morris, Dan Ackroyd, and Chevy Chase. The characters they created -- the Coneheads, the Bees, the Blues Brothers -- were just as well loved. Within three years, Saturday Night Live had eclipsed The Tonight Show as the most-watched show of late-night television.