Equal Rights Amendment (ERA) - designed to guarantee equal rights for women: Initiated in 1916 was finally approved by US Congress in 1972

A proposed amendment to the Constitution of the United States to provide for the equality of sexes under the law. The central language of the amendment states: “Equality of rights under the law shall not be denied or abridged by the United States or by any State on account of sex.” The ERA would have made unconstitutional any laws that grant one sex different rights than the other.

In 1916 Alice Paul, a leader in the suffragist movement, founded the National Woman's Party (NWP), a political party dedicated to establishing equal rights for women. Paul viewed equality under the law as the foundation essential to full equality for women. Along with her colleagues, Paul began to work on constitutional amendments recognizing equal rights for women at both state and federal levels. In 1921 various groups, which two years before had been close allies of the NWP, fiercely opposed the NWP's proposed language banning “political, civil or legal disabilities or inequalities on account of sex, or on account of marriage unless applying alike to both sexes.” Labor organizers and others fighting for women's economic welfare believed this push for legal equality threatened legislation that had been passed to protect exploited women working in factories. While Paul was not opposed to improving oppressive conditions in industry, she and other like-minded women argued that the laws designed to protect women could be used to restrict their employment opportunities.


Despite strong opposition by some women and men, the NWP introduced an Equal Rights Amendment to the U.S. Constitution in 1923. In order to become law, the amendment needed a two-thirds vote in both houses of the Congress of the United States, or a supporting petition of two-thirds of the state legislatures. Then the amendment would have required ratification by three-fourths of the states. However, it failed to get the two-thirds majority required to move on to the states for approval. The proposed amendment also failed in subsequent sessions until 1972, when it won a majority vote in Congress.

By the 1960s, the political atmosphere regarding the status of women in the United States had changed dramatically. An influential book by Betty Friedan, The Feminine Mystique (1963), challenged traditional attitudes about women, and the civil rights movement had given women a model upon which they could base their own fight for equal rights. The National Organization for Women (NOW), formed in 1966, made the ERA central to its mission. Within a few years the ERA had won the support of both the Democratic and Republican parties. When the ERA came before Congress in 1972, it had the support of President Richard Nixon. It received the needed two-thirds majority of both houses, including the votes of all but eight senators. The proposed amendment quickly moved to the states in the second phase of the amendment process.

Opposition to the ERA in the 1970s was similar in some ways to opposition in the 1920s. Conservative politicians and organizations voiced strong opposition to the amendment. Phyllis Schlafly, one of the amendment's most vocal opponents, founded Stop ERA, a group that worked to defeat the amendment. Schlafly alleged that the ERA would force women to take on roles normally reserved for men and that equal rights meant women would give up the “privileges” of womanhood. She and others also appealed to opponents of abortion, arguing that the ERA would bar any restrictions on abortion. Despite this opposition, by March 1974 the amendment had been ratified by 33 of the required 38 states. A congressional mandate had set March 1979 as the deadline for ratification; by June 1978, only two additional states had approved the ERA. Ceding to popular sentiment, Congress granted a three-year, two-month extension for approval, yet not one additional state ratified the measure in that time. Ten years and two months after its first passage by Congress, the ERA failed to become to part of the constitution. Since its defeat, the ERA has been reintroduced in each opening session of Congress, and 16 states now guarantee equality of the sexes in their state constitutions. 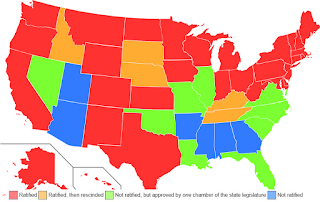