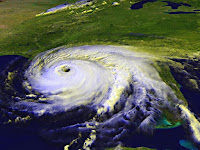 Tropical cyclones (hurricanes, typhoons) form and grow over warm ocean water, drawing their energy from latent heat. Latent heat is the energy released when water vapor in rising hot, humid air condenses into clouds and rain. As warmed air rises, more air flows into the area where the air is rising, creating wind. The Earth’s rotation causes the wind to follow a curved path over the ocean (the Coriolis effect), which helps give tropical cyclones their circular appearance.

Hurricanes and tropical cyclones form, maintain their strength, and grow only when they are over ocean water that is approximately 27°C (80°F). Such warmth causes large amounts of water to evaporate, making the air very humid. This warm water requirement accounts for the existence of tropical cyclone seasons, which occur generally during a hemisphere’s summer and autumn. Because water is slow to warm up and cool down, oceans do not become warm enough for tropical cyclones to occur in the spring.

Oceans can become warm enough in the summer for hurricanes to develop, and the oceans also retain summer heat through the fall. As a result, the hurricane season in the Atlantic Basin, which comprises the Atlantic Ocean, Caribbean Sea, and the Gulf of Mexico, runs from June 1 through November 30. At least 25 out-of-season storms, however, have occurred from 1887 through 2003, and 9 of these strengthened into hurricanes for at least a few hours.


Hurricanes weaken and die out when cut off from warm, humid air as they move over cooler water or land but can remain dangerous as they weaken. Hurricanes and other tropical cyclones begin as disorganized clusters of showers and thunderstorms. When one of these clusters becomes organized with its winds making a complete circle around a center, it is called a tropical depression.

For a tropical depression to grow into a hurricane, winds from just above the surface of the ocean to more than 12,000 m (40,000 ft) in altitude must be blowing from roughly the same direction and at the same speed. Winds that blow in opposite directions create wind shear—different wind speeds or direction at upper and lower altitudes—that can prevent a storm from growing.
(Encarta encyclopedia)