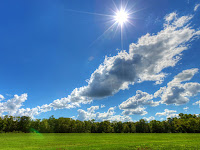 Clouds are condensed form of atmospheric moisture consisting of small water droplets or tiny ice crystals. Clouds are the principal visible phenomena of the atmosphere. They represent a transitory but vital step in the water cycle, which includes evaporation of moisture from the surface of the earth, carrying of this moisture into higher levels of the atmosphere, condensation of water vapor into cloud masses, and final return of water to the surface as precipitation.

The formation of clouds caused by cooling of the air results in the condensation of invisible water vapor that produces visible cloud droplets or ice particles. Cloud particles range in size from about 5 to 75 micrometers (0.0005 to 0.008 cm/0.0002 to 0.003 in). The particles are so small that light, vertical currents easily sustain them in the air. The different cloud formations result partly from the temperature at which condensation takes place. When condensation occurs at temperatures below freezing, clouds are usually composed of ice crystals; those that form in warmer air usually consist of water droplets. Occasionally, however, supercooled clouds contain water droplets at subfreezing temperatures. The air motion associated with cloud development also affects formation. Clouds that develop in calm air tend to appear as sheets or stratified formations; those that form under windy conditions or in air with strong vertical currents have a towering appearance.

Clouds perform a very important function in modifying the distribution of solar heat over the earth's surface and within the atmosphere. In general, because reflection from the tops of clouds is greater than reflection from the surface of the earth, the amount of solar energy reflected back to space is greater on cloudy days. Although most solar radiation is reflected back by the upper layers of the clouds, some radiation penetrates to the surface of the earth, which absorbs this energy and reradiates it. The lower parts of clouds are opaque to this long-wave earth radiation and reflect it back toward earth. The result is that the lower atmosphere generally absorbs more radiative heat energy on a cloudy day because of the presence of this trapped radiation. By contrast, on a clear day more solar radiation is initially absorbed by the surface of the earth, but when reradiated this energy is quickly dissipated because of the absence of clouds. Disregarding related meteorological elements, the atmosphere actually absorbs less radiation on clear days than on cloudy days.

Cloudiness has considerable influence on human activities. Rainfall, which is very important for agricultural activities, has its genesis in the formation of clouds. The marked effect of clouds on visibility at flight levels proved to be a major difficulty during the early days of the airplane, a hazard that was alleviated with the development of instrument flying, which permits the pilot to navigate even in the midst of a thick cloud. The sharp increase in consumption of electricity for lighting during cloudy days represents one of the major scheduling problems faced by the electric-power industry.
(Adapted from Encarta Encyclopedia)