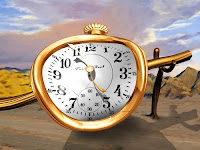 Time is conscious experience of duration, the period during which an action or event occurs. Time is also a dimension representing a succession of such actions or events. Time is one of the fundamental quantities of the physical world, similar to length and mass in this respect. The concept that time is a fourth dimension—on a par with the three dimensions of space: length, width, and depth—is one of the foundations of modern physics. Time measurement involves the establishment of a time scale in order to refer to the occurrence of events. The precise determination of time rests on astronomical and atomic definitions that scientists have established with the utmost mathematical exactness.

Physicists agree that time is one of the most difficult properties of our universe to understand. Although scientists are able to describe the past and the future and demarcations such as seconds and minutes, they cannot define exactly what time is. The scientific study of time began in the 16th century with the work of Italian physicist and astronomer Galileo Galilei. In the 17th century English mathematician and physicist Sir Isaac Newton continued the study of time. A comprehensive explanation of time did not exist until the early 20th century, when German-born American physicist Albert Einstein proposed his theories of relativity. These theories define time as the fourth dimension of a four-dimensional world consisting not just of space but of space and time.

Several ways to measure time are in use today. Solar time is based on the rotation of Earth on its axis. It makes use of the Sun’s apparent motion across the sky to measure the duration of a day. Sidereal time is also based on Earth’s rotation, but uses the apparent motion of the “fixed” stars across the sky as Earth rotates as the basis for time determination. Standard time, the familiar clock time most people use in everyday life, is based on the division of Earth’s sphere into 24 equal time zones. Dynamical time—formerly called ephemeris time—is the timescale of astronomy. Astronomers use the orbit of Earth around the Sun, as well as the orbital motions of the Moon and the other planets, to determine dynamical time. Atomic time is based on the frequency of electromagnetic waves that are emitted or absorbed by certain atoms or molecules under particular conditions. It is the most precise method for measuring time.
(Encarta Encyclopedia)