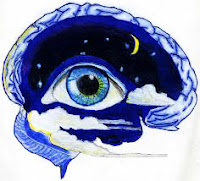 The phrase "mind's eye" refers to the human ability to visualize, i.e., to experience visual mental imagery; in other words, one's ability to "see" things with the mind.

The brain converts the outside world into the minimum it requires: a sense of three physical dimensions plus time. It can convey several more dimensions, as Escher does in his visually paradoxical paintings, and it can think abstractly about still more dimensions, as physicists sometimes do, using mathematical symbols as mental handrails. Just as a two-dimensional painting or photograph conjures up a four-dimensional world, the brain envisions itself in space and time. But only as much space and time as it needs to survive, given its senses and limits. I often wonder about the senses of life-forms in other solar systems, how many dimensions their universe might seem to hold, depending on their biology and culture. If they have a culture, and an awareness of the outside world, and if they value truth.

We cannot know. Faith eases that strain. Faith in most anything, but especially in religion, science, and love, because they're so good at providing useful and pleasing patterns and rewards. Certainty feels sweet. Especially the certainty of knowing who and what goes where in a chaotic world. In the mind's eye, that ancient seat of imagining, neurons appear to branch like trees, and angels have taffeta bird wings.

How does the brain operate the mind's eye? Brain scans reveal that when the mind's eye is open, there's more blood flow to visual parts of the occipital, parietal, and temporal lobes - brain parts active in ordinary vision. The mind's eye uses some of the same systems and echoes the effect of really seeing something. One can inspect a mental image, say the left bank of Six Mile Creek, and focus on a great blue heron fishing almost invisibly at the far shore. The more complicated the scene, the longer it takes to picture, since we add elements one at a time, painting them on. "The reason more complex images require time to generate is simple," Stephen Kosslyn and Olivier Koenig explain in Wet Mind. "Each part is imaged individually, and it takes time to look up the spatial relation, adjust the attention window to the appropriate location, and form an image of the part." So, though it seems to pop into mind, hocus-pocus, the image appears in stages. The mind's eye is limited in scope. It can only hold so much detail, and images don't stay there long. Remember your mother's face. The image fades. Recall it again. It fades again. Recall it again. Now zoom in on the chin. The rest fades. Then the chin fades. Things evaporate in the mind's eye. They can be renewed, but they'll fade again. It's only a temporary arena.

In Kosslyn's lab, I took part in a fascinating MRI experiment. Wearing a stiff plastic mask that made me feel a little like an armadillo, I lay with my head in the business part of the machine, and either looked at pictures of various objects or simply thought about them, conjuring them in my mind's eye. Both activities engaged the same parts of the brain. This suggests that whether we imagine something richly in the mind's eye, or actually see it, to the brain it's nearly the same experience. Think what this implies about witnessing violent crime, remembering childhood trauma, watching violence on television, or preparing for a sports event. On one level, we know it's not real. Kosslyn finds that when most people "imagine practicing something, they see themselves from someone else's point of view." It's a form of self-mimicry or imitation. One abstracts oneself to teach oneself, and it works. Because we use the same representations to direct what we do and what we imagine we do, "refining these... in imagery will transfer to actual movements."

In the mind's eye, neurobiology and art meet. When an artist imagines something, to the artist it is as real as rain. Then we look at that landscape, hear that music, read that book, or watch that film, and on some cognitive level understand that what we're seeing isn't real, that it's an invention. But the brain processes the information as if it were real, and so we're partly transported to the world the artist lives in, we feel that emotion, we enter that landscape.

Human beings are sloshing sacks of chemicals on the move. The skin provides a clear boundary between self and world. Or so it seems. Since we don't have microscopic vision, we can't see our ragged edges swapping molecules with the invisibly teeming air. Thus we imagine containers everywhere, outside and in. In the mind's eye, we imagine the body full of vessels, pockets, chambers, receptacles. The blood circulates inside veins, arteries, and capillaries. Cells and plasma fill up the blood. A cage of ribs holds the heart and lungs. Muscles, tendons, and ligaments are girdled by spandex-like skin. I could have started smaller: molecules containing atoms containing quarks. I could go quantum and add that bits disappear when I look at them and can appear in two places at once. That takes some getting used to, it beggars belief, because we inherited a different understanding of the world's physics, a practical one that only works on a larger scale. Quantum physics goes against our instincts. Still, we can picture it in the mind's eye.

One of the ultimate mind's eyesights of our age is imagining the surface of another planet. It still amazes me that, aided by abstract data and skimpy pictures, our small brains can house the reality of a huge planet. I've been to a few of NASNs flybys, and in my mind's eye at the moment, I'm seeing one of them clearly: when Voyager flew its closest to Uranus in 1987…

Few things on Earth are as thrilling as watching the first glimpses of a planet roll in. Computer-fed, they unravel down the viewing screen, row by row, as if a giant were undoing the yams of ignorance. Like me, many people had been waiting for those startling pictures for more than a decade, from the moment Voyager was launched with its mission of revealing the outer reaches of the solar system. Others were there to stretch their mind's eye a little wider, and some I suppose just for the sheer spectacle. Every encounter was exhilarating for different reasons. The amazing moons of Jupiter no one had seen up close before. The rings of Saturn that looked like ribbons of sherbet. The gauzy white face of Venus' acid clouds. The unthinkably barren and remote moons of Uranus. The windy, red geology of Mars. Where else could one glimpse the same deserts and seas people have ached to visit for as long as there have been people?

Even though I'm sitting in my study today, watching an autumn snowfall quilt the garden in downy white, and that Uranus encounter feels light-years away, I can easily conjure it up. "Men go out and gaze in astonishment at high mountains," wrote St. Augustine ages ago, "the huge waters of the sea, the broad reaches of rivers, the ocean that encircles the world, or the stars in their courses. But they pay no attention to themselves. They do not marvel at the thought that while I have been mentioning all these things, I have not been looking at them with my eyes, and that I could not even speak of mountains or waves, rivers or stars, which are things that I have seen, or of the ocean, which I know only on the evidence of others, unless I could see them in my mind's eye, in memory."
(Adapted from ‘An Alchemy of Mind’, by Diane Ackerman, and Wikipedia)