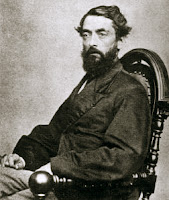 He was an American petroleum engineer, credited with drilling the first productive oil well in the United States. Born in Greenville, New York, Drake held many different jobs as a young man, including railway conductor, steamboat employee, and hotel clerk. He became interested in oil after investing $200 in the stock of the Pennsylvania Rock Oil Company, which was formed in 1854 to exploit oil resources in northwestern Pennsylvania.

At the time, oil was often used for its presumed medicinal properties. Techniques for tapping underground oil were so undeveloped that it was primarily gathered as ground seepage, a method used by Pennsylvania Rock Oil. Drake was convinced, however, that he could collect oil in far larger quantities by drilling for it as others drilled for brine, a natural combination of water with a high salt content. He studied brine drilling and set off to Titusville, Pennsylvania.

Drake leased the land at Titusville that he thought most likely to produce oil. He worked for months to bring together the equipment and operators he needed, in the meantime enduring ridicule from local people who scorned his enterprise as “Drake’s Folly.” The actual drilling began in June 1859. One of Drake’s innovations in the procedure was a device used to sink a pipe casing down to bedrock in order to protect the drill from sand and clay and the well from water seepage. After weeks of drilling, Drake and his team reached a depth of 21 m (69 ft), where they struck oil. The initial yield was 40 barrels a day.

An ineffective businessman, Drake did not patent his methods for petroleum drilling, and he lost his operating capital by making bad investments in later oil operations. He survived during the last years of his life on a pension granted by the Pennsylvania legislature.
(Adapted from Encarta Encyclopedia)