The Peopling of the World 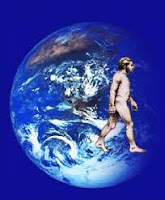 Scientists today estimate that the Earth is 4.6 billion years old, but that number has shifted more than a few times over the last century. The earliest signs of human activity did not appear until 2.7 million years ago, in the early Stone Age (or Lower Paleolithic era), which lasted until 200,000 years ago, although the species called Australopithecus dates back more than 4 million years ago. Africa is often referred to as "the cradle of humanity," and all the fossil discoveries were made there.

The earliest human ancestors--called hominids--walked upright on two legs and were scavengers. Homo erectus, another early hominid dating from 1.5 million years ago, evolved in Africa but migrated to Eurasia, the first human species to do so. These very early humans used fire (but probably could not make it), created stone weapons and tools, and were successful in occupying a wide range of habitats. Nevertheless, all non-African populations of Homo erectus eventually died out without leaving descendants.

Our own species, Homo sapiens, evolved from Homo erectus through various transitional stages in the savannah lands of eastern Africa about 150,000 years ago. Homo sapiens is a highly social and adaptable species, fully capable of using complex language. Modern humans moved out from the original species' homeland on the eastern plains of Africa to occupy much of eastern, northern, and southern parts of the continent. The special challenges of the rain forest environment slowed the movement of humans into the western regions of Africa.

Around 105,000 years ago, modern humans migrated northward through Egypt and out of Africa via the Sinai Peninsula to the Middle East. There they apparently met and coexisted with humans of a different and older species - Neanderthals (Homo neandertalensis)-- that had a simpler, less flexible culture and technology.

Following the coast of southern Asia, modern humans were in India and Southeast Asia by 90,000 years ago. (Ocean levels were generally much lower at the time because a vast amount of water was locked up in the glaciers of the Ice Age, so much of Southeast Asia was dry land, part of an exposed continental shelf. Any traces of these people and their coastal migrations would now be submerged off the present-day coastlines of Asia.) Sometime between 65,000 and 40,000 years ago, humans crossed miles of open ocean (probably on rafts) to reach New Guinea and Australia. No later than 50,000 years ago, other populations migrated from the Middle East across the plains of Central Asia to China and northeastern Asia, eventually making it to the islands of Japan. As Homo sapiens spread to East and Southeast Asia, remnant populations of Homo erectus were displaced and became extinct.

Humans made their way into Europe beginning around 40,000 years ago, challenging the existing populations of Neanderthals there. Whether from superior social organization and technology, outright extermination of the Neanderthal competitors, or some other cause (or combination of causes), the last Neanderthals became extinct around 30,000 years ago, and Homo sapiens was in complete control of the Eurasian continent. The early human occupants of Europe and northern Asia of the Late Paleolithic period, roughly 40,000 to 12,000 years ago, devised highly sophisticated means of dealing with the cold glacial environment, including the efficient hunting of large animals, the processing of hides and the creation of cut-and-sewn hide and fur garments, the use of fire (for heating, cooking, and light), and the creation of warm shelters from the elements.

The earliest known structures built by archaic humans were excavated at Terra Amata in southern France, dating to about 380,000 years ago. The site consisted of some 20 huts built of branches held in place by large stones arrayed in oval rings. Beginning around 40,000 years ago in Europe, early humans began to create domestic and ceremonial spaces in caves that were often elaborately decorated with wall paintings. A typical example is the cave at Lascaux in southwestern France, which was inhabited between 10,000 and 20,000 years ago. Not only does it contain evidence of daily life, but its walls are painted with exquisitely sensitive pictures of animals and humans; these paintings are assumed to have had religious or magical significance.

The "tool kit" of these Paleolithic Homo sapiens was far more elaborate than that of earlier human species, and it included not only a wide range of edged tools and projectile points, but also important devices such as spear-throwers, needles, and hammers, all made of carefully chosen materials (such as antler and bone) and skillfully crafted.

Using this technology, some humans moved to northeastern-most Eurasia, and from there across a broad plain of open land connecting Eurasia with North America (a "land bridge" where the Bering Strait now separates the two continents), introducing humans to the Americas around 15,000 years ago. Some scholars adhere to a conservative view that dates the event to around 13,500 years ago, based on the archaeological record of the Clovis Culture complex (originally identified in New Mexico, but found widely in North America), characterized by distinctive and finely made projectile points. Other scientists point to securely dated sites that predate the Clovis Culture by at least several thousand years, including some in South America, which suggest a considerably earlier migration. With this migration, or series of migrations, all of the continents of Earth except for Antarctica had become human habitats. Settlement of the Indo-Pacific archipelagoes soon followed, with the ancestors of the Austronesian-speaking peoples setting out from the Fujian coast of China around 7000 B.C. to settle Taiwan, the Philippines, Indonesia, Melanesia, Micronesia, and Polynesia.

Over the course of these migrations, humans became adapted to specific habitats (hot, cold, sunny, light-deprived, and so on), and widely separated populations developed in genetic isolation from one another. These two factors caused the evolution of superficial traits such as skin color, hair color and texture, eyelid shape, and so forth, which came to be the external defining characteristics of what is now called "race." All humans during the millennia of the great migrations also demonstrated the human capacity for the creation of culture and art. Art from this period showed great diversity and refinement, from the cave paintings and ivory sculptures of prehistoric Europe to the equally ancient rock art of Australia.

All humans at that time shared the basic lifestyle of hunting and gathering. Animals, birds, and fish were hunted and trapped for food, shellfish were gathered in oceans and rivers, and great numbers of plants were identified and harvested for use as food, fiber, medicine, dyes, and for other purposes. It was a potentially rich and abundant way of living, but one that depended on low population density and little population growth, probably resulting from prolonged nursing of children (which suppresses maternal fertility) , as well as from high infant and child mortality rates. Even very slow growth in population density was probably a significant impetus for the migration, as bands of migrants left populated areas in search of new hunting and gathering grounds. The end of the last ice age 11,000 to 12,000 years ago led to unprecedented population growth in some places, which had momentous consequences for human history.
(‘The New York Times ‘Smarter by Sunday – 52 Weekends of Essential Knowledge for the Curious Mind’)