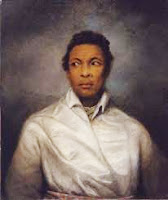 The first African to come to the New World may have been Pedro Alonzo Nino (1468-1505?), who was not a slave but a pilot and a navigator for Christopher Columbus on his first voyage. It's possible that there were earlier trading contacts between Africa and the Americas, but historians are still debating the evidence. Africans were certainly involved in other European explorations: thirty black men were with Vasco Nunez de Balboa when he reached the Pacific Ocean in 1513; Africans accompanied Hernando Cortes to Mexico and Francisco Pizarro to Peru; and they ventured into Canada and the Mississippi Valley with the French. And, around 1780 or 1790, it was a black man from Haiti, Jean Baptiste Point du Sable, who constructed the first non-Native dwelling at a trading post that would later be named Chicago.
- Kee Malesky (‘All Facts Considered’)