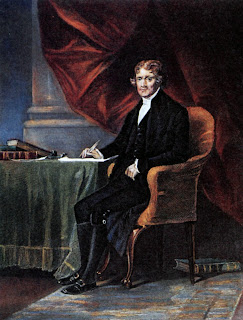 Thomas Jefferson was one of America’s founders and its third president. Called "the pen of the American Revolution," Jefferson wrote the Declaration of Independence in 1776, at the age of 33.

Jefferson was a strong supporter of democracy, and he especially championed freedom of speech and of the press. Among his greatest achievements was his Bill for Establishing Religious Freedom, which he introduced while serving as governor of Virginia (1779-81); it called for the separation of church and state and guaranteed religious freedom in Virginia.

As a young man, Jefferson began building a home on a mountaintop near Charlottesville, Virginia. Named Monticello, this white-domed dwelling may be familiar to many people because its image is found on the U.S. nickel.

Jefferson died on July 4, 1826 - the fiftieth anniversary of the Declaration of Independence. At the time of his death he was almost bankrupt, and many of the paintings, furniture, and other belongings that filled Monticello were sold to pay his debts. In 1993, to celebrate the anniversary of his birth, more than 150 of these treasures were regathered in Monticello, in a special exhibition that was viewed by hundreds of thousands of visitors.

Among the items on display were silver goblets designed by Jefferson; a buffalo robe given to Jefferson by Lewis and Clark after their expedition to the Northwest; a sewing kit that belonged to Mrs. Jefferson; hundreds of leather-bound books; and various natural history specimens, including the bones of prehistoric animals. But for many visitors the most precious object in the exhibit was Jefferson's portable lap desk, on which he penned the following words: