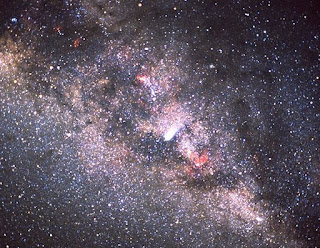 The Milky Way is the galaxy that contains the Earth. This name derives from its appearance as a dim "milky" glowing band arching across the night sky, in which the naked eye cannot distinguish individual stars. The Milky Way appears like a band because it is a disk-shaped structure being viewed from inside. The fact that this faint band of light is made up of stars was proven in 1610 when Galileo Galilei used his telescope to resolve it into individual stars. In the 1920s, observations by astronomer Edwin Hubble showed that the Milky Way is just one of many galaxies.

The Milky Way is a barred spiral galaxy 100,000–120,000 light-years in diameter containing 200–400 billion stars. It may contain at least as many planets, with an estimated 10 billion of those orbiting in the habitable zone of their parent stars. The Solar System is located within the disk, around two thirds of the way out from the Galactic Center, on the inner edge of a spiral-shaped concentration of gas and dust called the Orion–Cygnus Arm. The Galaxy rotates differentially, faster towards the center and slower towards the outer edge. The rotational period is about 200 million years at the position of the Sun. The Galaxy as a whole is moving at a velocity of 552 to 630 km per second, depending on the relative frame of reference. It is estimated to be about 13.2 billion years old, nearly as old as the Universe. Surrounded by several smaller satellite galaxies, the Milky Way is part of the Local Group of galaxies, which forms a subcomponent of the Virgo Supercluster. (Adapted from Wikipedia Encyclopedia)