Who Discovered the Panda? 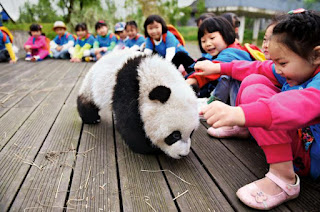 Until 1869, few had heard of the giant black-and-white creatures hiding in China’s forests. Decades later, pandamania gripped the world.

Though today giant pandas are known and loved worldwide, it wasn’t always so.

Ancient Chinese texts rarely mention the native animals. Westerners first learned of them in 1869 when French missionary Armand David, while in China, laid eyes on a distinctive black-and-white pelt and then bought a complete, dead specimen from local hunters. A zoologist in Paris wrote up the official description of Ailuropoda melanoleuca (literally, “cat foot, black and white”).

In 1929 Chicago’s Field Museum put two mounted pandas on display courtesy of the Roosevelt brothers, Theodore Jr. and Kermit. The two were sons of the 26th U.S. president, whose love of sport hunting ultimately propelled major conservation reforms. With the help of Sichuan Province locals, they brought home the first panda shot by white men for the museum’s new Asian Hall. Their feat prompted copycat expeditions funded by other museums.


As dead bears lost some allure, plans shifted to getting a live panda out of China. In December 1936 a wild cub named Su-Lin left Shanghai by ship in a wicker basket carried by Ruth Harkness, with an export permit reading “One dog, $20.00.” Harkness, a San Francisco socialite who had fallen in love as she bottle-fed Su-Lin on a visit to China, soon sold the animal to Chicago’s Brookfield Zoo. There, pandamania was instantaneous: More than 53,000 visitors showed up for the exhibit’s opening day.

That mania persists. Currently at least 20 zoos outside China boast giant panda displays. (For a time China gifted pandas to foreign countries; now the government rents out pairs for a million dollars a year and retains ownership of cubs born abroad.) Panda births and deaths make international news; web videos quickly go viral. The panda cam trained on a new cub at the Smithsonian’s National Zoo in Washington, D.C., had nearly 14 million views by the animal’s six-month birthday. During the 2013 government shutdown, fans had complained loudly when the camera went dark.

This tremendous devotion to pandas has roots in science. When humans see pandas, we are subconsciously affected by what developmental biologists call neoteny, the retention into adulthood of certain infant characteristics. That cute baby face and toddler-like behavior boost our body’s production of oxytocin, a hormone that makes us feel loving and protective.
(National Geographic – August 2016)