The Earth is warming up 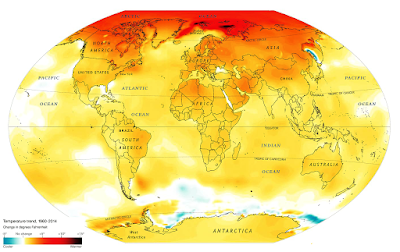 The Earth has warmed 1.5 degrees Fahrenheit on average since the late 19th century. Most of the warming has occurred since 1960, the period covered on this map. It reveals the regional variety buried in the global average. A few areas, most near the Antarctic, actually have gotten colder since 1960, while some parts of the Arctic have warmed as much as 15 degrees. Natural climate cycles explain why the warming has happened unevenly and fitfully, but not the warming trend itself, which has overwhelmed the cooling effect of the ash from volcanoes. It has coincided over the past half century with a surge in carbon emissions from rapidly industrializing world. Finding a way to stop those emissions – a climate change – is the challenge for the next half century.
(National Geographic, November 2015)