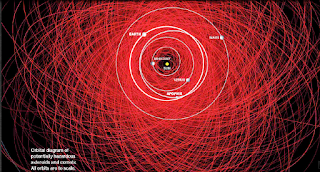 Every year the Earth loops through a solar system crowded with other bodies, there’s a chance it could run into trouble.

So far more than 5400 asteroids and comets have been spotted flying within 121 million miles of the sun – close enough to our planet for astronomers to classify them as near-Earth objects. Those that measure more than 4600 feet across and pass within 4.6 million miles of Earth’s orbit are considered potentially hazardous. As of April 2008, astronomers had cataloged more than 950 such bodies (red tracks in the above picture) – including Apophis, an asteroid that will come within 21000 miles of Earth in 2029. But observers are constantly monitoring their positions, recalculating their orbital paths and the impact risks they represent – and searching nearby space for new threats.
(National Geographic)