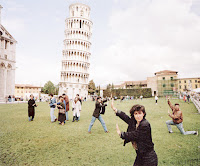 Looks like the Leaning Tower of Pisa will keep on leaning, stably, awhile longer. More than a dozen years after major foundation work, the imperfect edifice hasn't increased its lean. In fact, civil engineer John Burland of Imperial College London says his international team has succeeded in straightening the marble bell tower by 19 inches, reducing its angle of incline by about 10 percent, and slowing its once steady creep to nearly nothing. It wasn't easy. Built from 1173 to 1370 on silt and clay, the eight-story, 182- foot-tall tower resisted many efforts to stabilize it. What finally worked was a soil removal process called under-excavation and the addition of wells to regulate groundwater. The chief fear now? A big earthquake. "Absent that," says Burland," I'd be very surprised indeed if we see it lean significantly again."
- Jeremy Berlin  (National Geographic magazine)