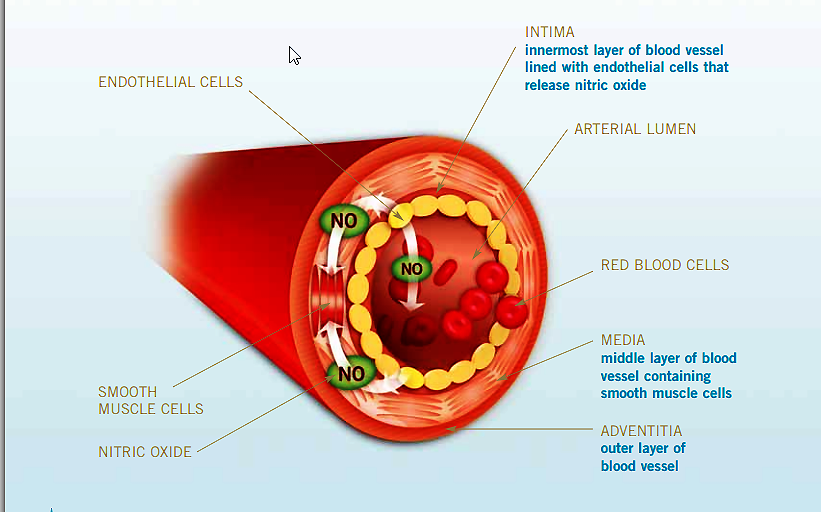 The well-being of your arteries depends on a healthy endothelium, the inner lining of your blood vessels. “Endothelial cells are the prima donnas within the blood vessels. They control almost every activity that occurs in the vessels, and they’re fundamentally altered with age,” Dr. Lakatta says. “People who maintain a healthy endothelium as they get older and those who make an effort to do things that promote the repair of injured endothelium can reduce the risk of heart attacks and strokes caused by atherosclerosis or hypertension.”

Although scientists still have much to learn about the endothelium and what can be done to keep it healthy, a number of studies suggest that certain modifiable risk factors can have an important impact on the cardiovascular system. For instance, regular moderate exercise, such as running, walking, or swimming can reduce body fat, increase lean muscle mass, decrease blood pressure, increase HDL cholesterol (the “good” cholesterol) levels, and lessen the extent of arterial stiffening. All of these exercise-induced changes can have a positive influence on endothelial cells.


In addition, scientists have long known that tobacco smoke contains numerous toxic compounds, such as carbon monoxide, that promote endothelial cell damage. Smoking also increases blood pressure and heart rate. Free radicals in smoke slash the amount of nitric oxide available in the blood stream. Nitric oxide, as you may recall, is a signaling molecule that helps keep arteries pliable. Because nicotine causes narrowing of blood vessels, less oxygen is transported to the heart. If you smoke, blood platelets become stickier and are more apt to form clots in your arteries.

As we mentioned earlier, high blood pressure, hypertension, causes blood vessels to thicken, diminishes production of nitric oxide, promotes blood clotting, and contributes to the development of atherosclerotic plaques in the arteries. Blood pressure is considered high when systolic pressure exceeds 140 mmHg and when diastolic blood pressure is higher than 90mmHg.

Excessive weight increases the risk of high blood pressure and can increase the likelihood that you’ll have high blood triglycerides and low HDL cholesterol, Dr. Lakatta says. Being overweight can also increase the probability you’ll develop insulin resistance, a precursor of diabetes.

Diabetes, a disease in which the body does not produce or properly use insulin, becomes more common as we age. In fact, nearly half of all cases are diagnosed after age 55. Atherosclerosis develops earlier and is more aggressive in people who have diabetes. In part, this occurs because diabetes causes the endothelium to produce excessive amounts of superoxide anion, a free radical that destroys nitric oxide. People age 65 and older who have diabetes are nearly four times more likely than those who don’t to develop peripheral vascular disease, a condition that clogs the arteries that carry blood to the legs or arms. And, cardiovascular diseases and stroke are leading causes of diabetesrelated deaths. If you suspect you have or are at risk for diabetes, check with your doctor. Symptoms include increased thirst, increased   hunger, fatigue, increased urination — especially at   night, unexplained weight loss, blurred vision, and slow healing of wounds and sores.

Researchers have also found that stress reduction   techniques, such as taking a walk, practicing yoga, or deep breathing are important to cardiovascular health. Emotional stress triggers the release of adrenaline from the adrenal gland and noradrenaline from the nerve endings in your heart and blood vessels. These hormones make the heart beat faster and adversely affect blood vessels. Under stress, an older person’s blood pressure rises more rapidly and stays higher longer than a younger person’s because the older person’s blood vessels are stiffer and have lost much of their elasticity.
(From ‘Aging Hearts and Arteries, a Scientific Quest’, a publication of US National Institute of Health)