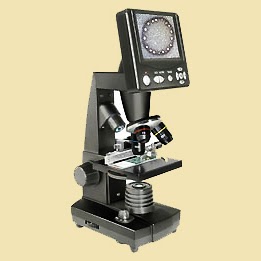 A microscope that uses electrons instead of visible light to produce highly magnified images of objects. Scientists use electron microscopes in many different fields of research, including medicine, biology, chemistry, metallurgy, entomology (the study of insects), and physics. Since its introduction in the 1930s, the electron microscope has revolutionized the study of microscopic structures and surfaces. See also Microscope.

Their invention
The invention of the electron microscope was made possible by a number of theoretical and experimental advances in physics and engineering. The main concept on which the electron microscope is founded—that electrons have a wavelike nature—was hypothesized by French physicist Prince Louis Victor de Broglie in 1923 (see Quantum Theory). In 1927, de Broglie’s hypothesis was experimentally verified by American physicists Clinton J. Davisson and Lester H. Germer, and independently by English physicist George Paget Thomson. In 1932 German engineers Max Knoll and Ernst Ruska built the first transmission electron microscope. In 1938 Ruska and German engineer Bodo von Borries built the first model of the commercial TEM for the Siemens-Halske Company in Berlin, Germany. The English engineer Sir Charles Oatley invented the SEM in its present form in 1952.

Powerful research tools
Electron microscopes have proven powerful research tools for investigating the basic structure of matter, specifically in the fields of biology and solid-state science. They have, for example, helped to reveal the surface structures of various materials and confirmed the shapes and behaviors of bacteria as well as animal and human cells and cell components. They are important in research examining the effects of various manipulations or treatments of these various types of subject matter. Scientists and publishers often add color to the highly detailed electron micrographs to increase interest, to help distinguish portions of the image, and to highlight important areas. Electron microscopes have given scientific and lay media remarkable pictures, such as the “faces” of insects, the shapes of microscopic organisms, and the surface structure of molecules of new, high-tech alloys and other substances. They are also becoming important to regular clinical pathology at medical centers.

TEM type
The TEM consists of an electron source, a number of lenses, and a system that projects an image onto a fluorescent screen or photographic plate. The lenses must be electric or magnetic lenses because standard glass lenses for light microscopes will not focus a beam of electrons. The electron source is a filament of tungsten that releases electrons when heated. A high voltage electric field (50,000 to 100,000 volts) applied between a pair of metal plates accelerates the electrons, and electric or magnetic lenses condense the electrons into a narrow beam. The electron beam then passes through the specimen and individual electrons are scattered in various directions depending upon the density of the material they encounter. Denser material scatters the electrons more so that fewer of them reach the device used to detect the electrons. Once the electrons pass through the specimen, the objective lens focuses them using magnetic fields. Specimens must be sliced extremely thin for use in a TEM because only electrons that pass through the specimen are recorded. Modern TEMs are capable of magnifications of between 1,000X to about 1,000,000X.

SEM Type
The SEM works by scanning a tightly focused electron beam over a sample. Electrons in the beam scatter off of the sample and onto a cathode ray tube, or screen. Each point on the sample corresponds to a pixel or picture element on the screen. The more electrons that hit a particular element of the screen, the brighter the pixel appears. As the electron beam scans over the entire sample, a complete image of the sample is displayed on the monitor. SEMs have a range of magnification of between 20X to 200,000X.

The SEM is particularly useful because it can produce detailed three-dimensional images of the surface of objects, whereas a TEM can only produce two-dimensional images. Samples scanned by an SEM do not need to be thinly sliced, as do TEM specimens, but they must be dehydrated to prevent electrons from being scattered by water molecules in the sample. The vessels that house electron microscopes must be evacuated to very high vacuum to prevent the scattering of the electrons off of air molecules. (Adapted from ‘Encarta Encyclopedia’)