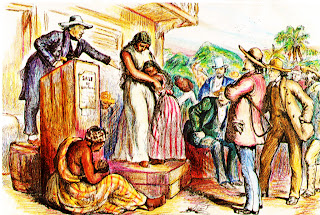 By 1860 there were about 4 million slaves, making up nearly a third of the South's population. The population of the United States, according to Census of 1860, was just short of 31.5 million. Originally, slaves that worked the Southern plantations were imported from Africa. As public feeling against slavery grew, the United States banned the importation of slaves in 1808. However, slaves were still bought and sold within the country, often at slave auctions such as the one shown in the picture. (Grolier Book of Knowledge Encyclopedia)