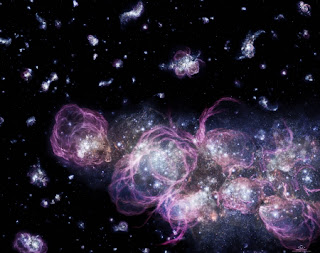 One way of measuring the extent of our knowledge about the universe is to ask how close to the beginning we can get in our description of the events that formed it. In the 1920s, for example, we knew enough about atoms to get to within half a million years of creation. By the Fifties, the development of nuclear physics had allowed us to come within three minutes. Today, thanks to our understanding of elementary particles, we can get to within a fraction of a second - fraction so small we need a different way of writing numbers to describe it. We can talk about time between 10 to the power -36 (that's a decimal point followed by thirty-five zeros and a one) and 10 to the power -43 (forty-two zeros and a one) seconds after the Big Bang. In fact, only one hurdle remains before we get to the moment of creation itself.

The best way to picture the evolution of the universe is to think of a cloud of highly compressed steam. If you let it go, it will expand, cooling off as it does so. When it cools to 212°F it will condense into droplets of water. If it continues to expand and cool it will reach another critical temperature -- 32°F -- at which point the water will freeze into ice. The same thing happened with the universe as would happen with the steam, except that the transitions that correspond to condensation and freezing are both more numerous and more complicated.

Although a few intrepid theorists have speculated on how the initial collection of matter that eventually became the universe came into existence, there is no firm scientific opinion on this subject; right now the question is simply beyond our knowledge. With regard to the first seconds of the universe -- the time elapsed before the first major "freezing -- we're in a little better shape. Although there is no generally accepted theory that describes matter at the temperatures that existed then, we can still make out some of its salient features. Most striking was a tremendous simplicity. Instead of the large number of basic particles we see in matter today, there was just one kind -- the so called superparticle.


At l0 to the power -43 seconds, the first "freezing” occurred. Two broad classes of particles appeared -- one group similar to the electron, the other similar to the photon (the "particle” which makes up visible light); quarks first appeared at this time as well. The force of gravity became distinguishable from the other forces. During the period from this freezing down to 10 to the power -36 seconds, the universe may or may not have conformed to something called the grand unification theory (GUT). This theory, first developed in the mid Seventies, is being subjected to intensive experimentation right now.

During freezings at and 10 to the power -36 and 10 to the power -12 seconds, respectively, the universe became steadily more differentiated and more complex. At around 10 to the power -5 seconds (that is, a tenth of a millisecond), the free quarks that had been roaming the universe condensed into the elementary particles that are the building blocks of matter as we know it. At three minutes, these elementary particles started to collect to form the nuclei of atoms. Finally, at five hundred thousand years, the final major transition occurred. The first electrons attached themselves to those nuclei to form simple atoms. In each of these cases, the transition to a new form of matter occurred as soon as the temperature had dropped to the point at which the interparticle collisions no longer had sufficient energy to disrupt the fragile new structure.

The fifteen billion years that have elapsed since then have seen the formation of galaxies and stars and the development of life. During this period, all of the chemical elements heavier than helium, including the iron in your blood and the carbon in your DNA, were made in stars that later died, returning their contents to the interstellar medium, where they were taken into the nascent solar system. Still, from the point of view of fundamental physics, all of the interesting events in the history of the universe were over by the time it was a few minutes old. In fact, it takes longer to describe what happened than it took the universe to undergo the actions described. (Adapted from ‘An Incomplete Education’, by Judy Jones and William Wilson)