The amazing health benefits of grapefruits 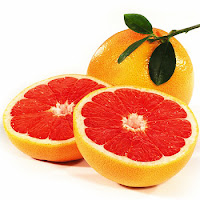 Grapefruits are grown all over the world, but they originated (or discovered) in the 18th century in the Caribbean islands – Barbados, Jamaica, West Indies. Many botanists think the grapefruit was actually the result of a natural cross breeding which occurred between the orange and the pomelo, a citrus fruit that was brought from Indonesia to Barbados in the 17th century. The resulting fruit was given the name "grapefruit" in 1814 in Jamaica, a name which reflects the way it's arranged when it grows-hanging in clusters just like grapes. It is now one of the widely cultivated fruits in the United States, particularly in Florida, California, and other semi-tropical southern states. Florida apparently grows more grapefruit than the rest of the world combined! As with all citrus, the heavier the fruit, the juicier. Florida grapefruits are juicier than those from California and Arizona. However, Western fruit has a thicker skin which is easier to peel. If refrigerated, grapefruit will last for a few weeks. Grapefruit is available all year, but best January through May.

Fresh grapefruit from California and Arizona are available all year and come in several colors including pink, red, white and golden. Each fruit is largely oblate, ranges in diameter from 3-4 inches and weighs up to 150 gram. The fruit usually has slightly thick and tough skin than that in oranges. The flesh is segmented as in oranges. The fruit is very juicy, acidic, and varying in color depending on the cultivars, which include white, pink and red pulps of varying sweetness. You can eat grapefruit just like an orange by peeling it and dividing it into segments. Each medium grapefruit has 10 to 12 sections.

The Latin name for grapefruit, citrus paradisi, succinctly describes both the taste of the fruit and the many health benefits that may be obtained by eating it. Pink grapefruit has some properties that blond, or white, grapefruit does not. A member of the citrus family, pink grapefruit is available throughout the year, but is at its best during the winter and early spring of the year.

Pink grapefruits are yellow to yellow-pink on the outside with a smooth peel. The meat of the fruit on the inside is a delicate pink color. Grapefruits range in size from four to six inches in diameter. Some varieties of pink grapefruits have seeds, others are seedless. According to Medicinal Food News, the pink variety of grapefruit contains a much higher concentration of vitamins and minerals that the white variety.

Instead of your morning glass of OJ, have a glass of grapefruit juice.

Combine diced grapefruit with cilantro and chili peppers to make a unique salsa.

To enjoy a salad with a tropical flair, combine chopped grapefruit pieces, cooked shrimp and avocadoes and serve on a bed of romaine lettuce.

Heath Benefits
Despite its versatility many people still only think of grapefruit in connection with breakfast. Here are some things that you may not know about grapefruit.

Grapefruit offers innumerable benefits to the consumer. It is high in Vitamin C, Vitamin A, potassium, and other vitamins and minerals essential for good health. Eating at least one grapefruit per day, or drinking concentrated grapefruit juice, can help you stay healthy and energized all day long. It can also help your immune system fight off disease. The pink and red varieties of grapefruit contain beta carotene as well as lycopene, two of the most powerful antioxidants. Being very low in calorie content, grapefruits have certain bioflavonoids and plant chemicals that effectively protect the body from life-threatening conditions such as heart attack and cancer.

According to nutrition experts, about half of a grapefruit will provide more than 45% of the adult Recommended Daily Allowance (RDA) of Vitamin C. In addition, it also provides about 175 micrograms of potassium and 1 micro gram of iron. Though all the varieties of this fruit have rich content of minerals, it has been found that the red and pink varieties are high in beta carotene, which is converted into Vitamin A by the body.

Grapefruit is an excellent source of vitamin C, a vitamin that helps to support the immune system. It provides about 52% of the Daily Recommended Allowance. Vitamin C is a powerful natural anti-oxidant that helps the body develop resistance against infectious agents and scavenge harmful free radicals. Vitamin C is also required for the maintenance of normal connective tissues as well as for wound healing. It also facilitates dietary iron absorption from the intestine. A number of scientific studies have suggested that vitamin C is effective in helping the body fight the common cold. Vitamin C also prevents free radical damage that triggers an inflammatory cascade, and is therefore also associated with a reduction in the  severity of inflammatory conditions, such as asthma, osteoarthritis, and rheumatoid arthritis.

Grapefruit has a low impact on blood sugar, making it a perfect snack for those with Diabetes. Sweet grapefruit varieties are often recommended to diabetics, along with other citrus fruits, to replace sugary snacks which may have a high impact on blood sugar. Grapefruit are also a good food to include in an ideal weight-loss program, half a medium grapefruit (= one serving) contains about 50 calories and the high fiber content in the fruit helps to curb hunger by giving a sense of fullness.

Grapefruit is very beneficial in the fight against cancer. Pink and red grapefruit are high in lycopene, a carotenoid phytonutrient, the most powerful flavonoid antioxidant. Among the common dietary carotenoids, lycopene has the highest capacity to help fight oxygen free radicals, which are compounds that can damage cells and promote heart disease and some forms of cancer. One halve of a pink grapefruit contains 4.9mg of lycopene. Lycopene also appears to have anti-tumor activity -- capable of lowering the risk of prostate cancer. While the exact mechanism of how lycopene helps in lowering prostate cancer is not clear and research is ongoing, it has been found in some studies that 10 servings of lycopene-rich foods a week resulted in a 50% reduction in prostate cancer. Lycopene is also known to protect skin from damage caused by UV radiation.

In addition to pectin and lycopene, grapefruits have other protective plant chemicals. Some of those chemicals include monoterpenes, terpenes as well as limonoids – all of which are responsible for producing enzymes that aid in preventing cancer; phenolic acid that arrests the forming of nitrosamines – said to be responsible for creating cancer cells; and bioflavonoids that arrests the creation of hormones that foster growth of tumor cells.

People suffering from inflammatory disorders such as rheumatoid arthritis and lupus are advised to consume grapefruit on a daily basis to alleviate the symptoms of these disorders. This is possibly due to the fact that the plant chemicals present in the grapefruit are capable of blocking the prostaglandins that cause inflammation.

Because grapefruit is high in dietary insoluble fiber pectin, it provides bulk which acts as a laxative that helps to protect the colon mucous membrane by decreasing exposure time to toxic substances in the colon as well as binding to cancer causing chemicals in the colon. Pectin has also been shown to reduce blood cholesterol levels by decreasing re-absorption of cholesterol binding bile acids in the colon. The fruit contains very good levels of vitamin A (provides about 1150 IU per 100g), and flavonoid antioxidants such as naringenin, beta-carotene, xanthin and lutein. Studies suggest that these compounds have antioxidant properties and are essential for vision. Vitamin A is also required for maintaining healthy mucus membranes and skin. Consumption of natural fruits rich in vitamin A and flavonoids helps to protect from lung and oral cavity cancers.

Grapefruit is very rich in potassium. Potassium is an important component of cell and body fluids, which helps control heart rate and blood pressure through countering the effects of sodium.

B-complex and minerals
Grapefruit contains moderate levels of the B-complex group of vitamins such as folates, riboflavin, pyridoxine, and thiamin in addition to some important minerals such as iron, calcium, copper, and phosphorus.

A study by Ruth Honow, et al, published in 2003 in the "British Journal of Nutrition," concluded that grapefruit juice seems to prevent the formation of calcium oxalate kidney stones when one-half to one liter per day is consumed.


The consumption of pink grapefruit will boost the body's immune system to fight any bacteria, fungi or parasites it may come into contact with. This in turn boosts the level of overall health.

Liver detoxificationConsumption of grapefruit juice is known to be beneficial for liver detoxification. Grapefruit juice will significantly increase the activity of the liver enzymes responsible for breaking down toxins and thus allows greater excretion of toxins from the body. Since certain carcinogens are among these excreted toxins, the risk of cancer is reduced.

Pink grapefruit gets its color from carotenoids (carotene). It contains over fifty times the carotenoid of white grapefruit. In the body, carotenoids are partially converted to functional foods or vitamin A. So eating pink grapefruit adds vitamin A to your diet. Vitamin A is an antioxidants that is required in the diet for good growth, skin development and is important in the maintenance of color and peripheral vision. There are many other foods that are better sources of vitamin A, but if you have a choice, and the price is the same, choosing pink grapefruit rather than white will boost your vitamin A intake.

Grapefruit and grapefruit juice are known to interact with a variety of different medications, such as calcium channel blockers, statins and cyclosporine. Consult your health care provider or pharmacist to ensure the safety of your consumption of grapefruit/grapefruit juice. (Compiled and adapted from a number of internet sites)