Viruses are infectious agents found in virtually all life forms, including humans, animals, plants, fungi, and bacteria. Viruses consist of genetic material—either deoxyribonucleic acid (DNA) or ribonucleic acid (RNA)—surrounded by a protective coating of protein, called a capsid, with or without an outer lipid envelope. Viruses are between 20 and 100 times smaller than bacteria and hence are too small to be seen by light microscopy. Viruses vary in size from the largest poxviruses of about 450 nanometers (about 0.000014 in) in length to the smallest polioviruses of about 30 nanometers (about 0.000001 in). Viruses are not considered free-living, since they cannot reproduce outside of a living cell; they have evolved to transmit their genetic information from one cell to another for the purpose of replication.

Viruses often damage or kill the cells that they infect, causing disease in infected organisms. A few viruses stimulate cells to grow uncontrollably and produce cancers. Although many infectious diseases, such as the common cold, are caused by viruses, there are no cures for these illnesses. The difficulty in developing antiviral therapies stems from the large number of variant viruses that can cause the same disease, as well as the inability of drugs to disable a virus without disabling healthy cells. However, the development of antiviral agents is a major focus of current research, and the study of viruses has led to many discoveries important to human health. (Encarta encyclopedia) 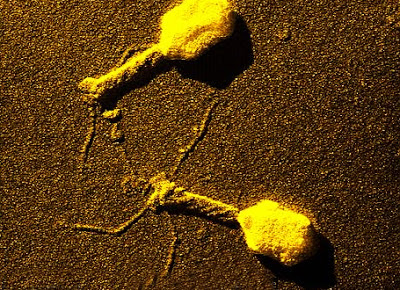 In this image from an electron microscope, a complex virus known as a bacteriophage (“eater of bacteria”) can be seen with its bulging head and tubular tail. Secured to its victim by the stringy fibers visible here, the tail acts like a needle in piercing the bacterium’s cellular wall. The head then passes its reservoir of DNA down the tail and into the host. Within 25 minutes the dying cell is teeming with about 100 fresh copies of the virus, which are created by the rearrangement of the bacterium’s own genetic contents. (Encarta encyclopedia)