The "astronomical" theory: Next Ice Age? 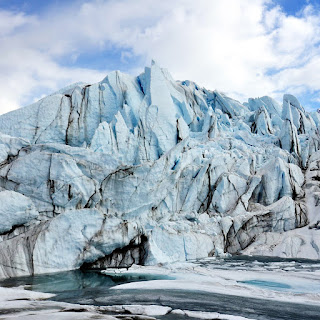 Yes, the Big Chill is coming, but you won't need your industrial-strength thermal underwear for another 3,000 to 20,000 years. Over the past billion years, the earth has experienced three long periods during which ice built up at its poles, each period made up of several 100,000-year "ice ages," when glaciers advanced to cover much of the world. These ice ages were punctuated by 10,000-year "interglacials," warm spells marked by the melting of the vast ice sheets. We live at the end of such a temperate time-out; the last great ice age wound down about 7,000 years ago. At its peak, 20,000 years ago, glaciers encased much of North America, Europe, and Asia. Days were about eleven degrees colder than they are now, forcing humans and animals southward.

It's not hard to see how an ice age is caused by a temperature drop, creating summers cool enough that the previous winter's snow never melts. Several seasons' snows accumulate and compact to form glaciers. But what turns down the thermostat? The cold facts have been hotly debated, but the theory most widely accepted - the "astronomical" theory - states that three periodic changes in the earth's position relative to the sun seem to have launched ice ages by influencing the amount of solar radiation the earth receives.

Because of the gravitational pull of the sun and moon on the equator, the earth wobbles on its axis like a toy top slowing down. Every 22,000 years or so, it describes a circle in space. The axis also tilts, causing the seasons. When the North Pole tips away from the sun, it's winter in the Northern Hemisphere. Today, the angle of tilt is 23 ½ degrees but every 41,000 years it moves from 22 to 24 degrees and back again. Perhaps the most important cycle is a change in the shape of the earth's orbit - from nearly circular to highly elliptical and back to circular - every 100,000 years due to the gravitational tug of fellow planets. The combined effect of these three cycles is to place the earth farther away from the sun at certain times, cooling the planet into an ice age.

If the astronomical theory makes sense to most scientists, why do some of them get all worked up about an imminent ice age? They insist that a veil of dust thrown up by man-made pollution and increased volcanic activity, together with thicker cloud cover generated by jet vapor, will lessen the amount of heat we get from the sun. (As so often happens in the wacky world of science, other people worry that some of these very same problems will make the earth too hot, not too cold.) Even if pollution and volcanoes do kick up enough dust to cause a slight drop in temperature (and we did find ourselves wearing sweaters a lot in the summer of1991, right after Mount Pinatubo erupted in the Philippines) most scientists agree that this will not alter the primordial rhythms of the cosmos. It'll be thousands of years before the ice age gathers steam, to mix a metaphor. In the meantime, ours may ultimately be the warmest interglacial in history - dangerously warm, thanks to the greenhouse effect.

(‘An Incomplete Education’, by Judy Jones and William Wilson)