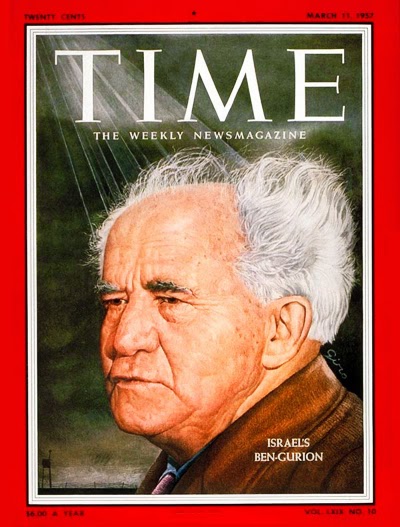 Born David Gruen in Poland, Ben-Gurion became committed to Zionism, the movement to settle and unite Jews in Palestine, under the influence of his father and grandfather. He studied in Warsaw, where he joined Po’alei Zion (Workers of Zion), a socialist workers party. Ben-Gurion saw Zionism as a practical idea to be carried out by Jewish immigration to Palestine and building the land through collective labor. In 1906 he moved to Jaffa, Palestine (now part of Tel Aviv-Yafo, Israel), and worked as a farmer. There he was elected to the central committee of Po’alei Zion and began organizing workers into unions. In 1910 he moved to Jerusalem and joined the editorial staff of a new Hebrew-language newspaper, Ahdut (Unity), publishing articles under the name Ben-Gurion (Hebrew for "son of the young lion"). He enrolled at the University of Constantinople in present-day Turkey in 1912 and earned a law degree in 1914. He then returned to Palestine and resumed his work as a union organizer, but in 1915 he traveled to the United States after he and thousands of other Zionists were exiled by the Ottoman Empire authorities who controlled Palestine.

In 1917 Britain issued the Balfour Declaration, which expressed the British government’s support for establishing a Jewish national home in Palestine. Ben-Gurion joined the Jewish Legion—volunteer military units formed to assist British troops in liberating Palestine from Ottoman rule. He returned to Palestine, where in 1920 he helped found a federation of Jewish labor unions called the Histadrut, of which he served as secretary general from 1921 to 1935. Ben-Gurion was also instrumental in founding the Ahdut Ha’avodah party in 1919, which became Mapai (Israel Workers Party) in 1930. From its founding, Ben-Gurion worked to ensure that Mapai was the dominant force in the Zionist movement. Meanwhile, in 1922 the League of Nations issued a mandate granting the British government control over Palestine.

Ben-Gurion's passion for Zionism, which began early in life, led him to become a major Zionist leader and Executive Head of the World Zionist Organization in 1946. As head of the Jewish Agency, and later president of the Jewish Agency Executive, he became the de facto leader of the Jewish community in Palestine, and largely led its struggle for an independent Jewish state in Palestine. On 14 May 1948, he formally proclaimed the establishment of the State of Israel, and was the first to sign the Israeli Declaration of Independence, which he had helped to write. Ben-Gurion led Israel during the 1948 Arab–Israeli War, and united the various Jewish militias into the Israel Defense Forces (IDF). Subsequently, he became known as "Israel's founding father".

Following the war, Ben-Gurion served as Israel's first Prime Minister. As Prime Minister, he helped build the state institutions, presiding over various national projects aimed at the development of the country. He also oversaw the absorption of vast numbers of Jews from all over the world. A centerpiece of his foreign policy was improving relationships with the West Germans. He worked very well with Konrad Adenauer's government in Bonn, and West Germany provided large sums (in the Reparations Agreement between Israel and West Germany) in compensation for Nazi Germany's persecution of the Jews during the Holocaust.

In 1954, he resigned and served as Minister of Defense, before returning to office in 1955. Under his leadership, Israel responded aggressively to Arab attacks, and in 1956, invaded Egypt along with British and French forces after Egypt nationalized the Suez Canal.

He stepped down from office in 1963, and retired from political life in 1970. He then moved to Sde Boker, a kibbutz in the Negevdesert, where he lived until his death. Posthumously, Ben-Gurion was named one of Time magazine's 100 Most Important People of the 20th century. (Adapted from Encarta Encyclopedia and Wikipedia Encyclopedia)