A legal holiday observed annually in the United States on the fourth Thursday of November. In Canada, Thanksgiving falls on the second Monday in October. Most people celebrate Thanksgiving by gathering with family or friends for a holiday feast. Thanksgiving was first celebrated by Pilgrim [English settlers] and Native Americans in colonial New England in the early 17th century. Its actual origin, however, probably traces to harvest festivals that have been traditional in many parts of the world since ancient times. Today Thanksgiving is mainly a celebration of domestic life, centered on the home and family.

The early English settlers who founded Plymouth Colony, the first permanent settlement in New England, were originally known as the Forefathers or Founders. The term Pilgrim was later first used in the writings of colonist William Bradford. 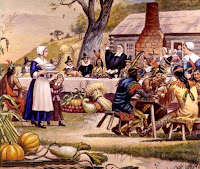 The Pilgrims, shown here celebrating their first Thanksgiving, were a group of Puritans who landed at Plymouth Rock, in what is now Massachusetts, United States, in 1620. In 1621 Governor William Bradford of New England proclaimed a day of “thanksgiving” and prayer to celebrate the Pilgrims’ first harvest in America. United States president Abraham Lincoln, following the precedent of a number of states, designated a national Thanksgiving Day in 1863. Now Thanksgiving Day falls annually on the fourth Thursday of November. (Encarta Encyclopedia)