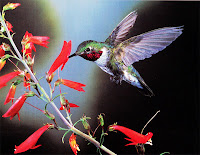 In a burst of brilliant color, a tiny bird appears. It hovers for a second in front of a flower, its wings beating so fast that they are nothing but a blur. Then it zips away, vanishing as quickly as it appeared.

The bird could only be a hummingbird, one of nature's smallest and most charming creatures. Hummingbirds invite superlatives. Besides including the world's smallest birds, they are among the most colorful, with iridescent feathers in a range of jewel-like tones. They are easily the most acrobatic birds, performing astounding feats in flight. And without doubt, hummingbirds are among the most fascinating of all birds.

There are more than 300 different kinds, or species, of hummingbirds. All of them live only in the Western Hemisphere, but they are found in almost all parts of it.

The smallest hummingbird - and the smallest bird - is the rare and tiny bee hummingbird of Cuba. This bird really could be mistaken for a bee. It weighs about as much as a penny and is just 2.5 inches (6.4 centimeters) long. And half that length is made up of its beak and its tail!

The largest hummingbird is the giant hummingbird, which lives in western South America from Ecuador to Chile. It weighs ten times as much as the bee hummingbird and is over 8 inches (21 centimeters) long, about the length of a common starling.
In between the bee and the giant are hummingbirds of all sorts and sizes. But most of the birds are small. And while not all hummingbirds are colorful, many are famous for their vivid tones - green, blue, ruby, violet, magenta. The brilliance of the birds' feathers has led people to call them "flying jewels."

This brilliance occurs because the feathers of many hummingbirds are iridescent, so that they catch and reflect light. When sunlight strikes a hummingbird's feathers at the right angle, the color seems to explode in a burst of fiery glitter. Depending on where you stand and how the light strikes the bird, it may seem that there are several colors where in fact there is only one . When no light shines on the feathers, they appear black.

Males are often more colorful than females, although this isn't always so. In many species the colors are concentrated on the bird's crown or throat. Some hummingbirds also have special adornments – elaborate crests or long, streaming tail feathers – that add to their beauty. The streamertail, found in Jamaica, has a forked tail more than 6 inches (15 centimeters) long, far longer than its body.

Hummingbirds share certain other features. Most hummingbirds have long, slender bills that are ideal for sipping the birds' favorite food - the nectar of flowers. A hummingbird inserts its bill deep into a flower and then extends its long tongue to lap up the sugary nectar.

In South America, where there are many kinds of hummingbirds, scientists have noticed that each type has a bill of a certain length. The shortest are those of hummingbirds called thornbills and are just half an inch (1.25 centimeters) long. The longest bills are those of the swordbills - at five inches (over 12 centimeters) , they are almost as long as the birds themselves.

In addition, some birds have straight bills, and some have curved bills. Each bill is ideal for feeding on the nectar of certain types of flowers. This allows many kinds of hummingbirds to live in the same area without competing for the same food sources.

Besides their tiny size and vivid colors, the most remarkable feature of hummingbirds is their ability to perform incredible feats in flight. A hummingbird will hover motionless in front of a flower to sip nectar and then actually fly backward to withdraw its bill from the bloom. It will dart a few inches to the side and hover again, perfectly positioned to sip from the next flower. Then it will suddenly dart away, reaching speeds of 30 miles (48 kilometers) an hour almost immediately. Hummingbirds can even fly upside down for short distances. They are the only birds that can perform all these acrobatic feats.

Hummingbirds are such accomplished aerialists that they use their wings for everything - in fact, most appear unable to hop or walk. Mother hummingbirds have even been seen to shift position on their nests by rising on their wings, turning in the air, and settling down again like little helicopters. 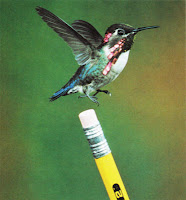 A hummingbird's wings beat so fast - 50 times a second in some species, as much as 80 times in others - that they are just blurs to the eye. (The rapid beating creates a humming sound, which has given the birds their name.) But by using slow-motion photography and by studying the way the birds' wings are put together, scientists have learned a lot about these incredible stunt flyers.

When the tiny birds hover, for example, their wings trace a figure-eight pattern in the air, moving forward and backward instead of up and down. The wings pivot so that each forward stroke and each backward stroke gives lift, helping the bird stay in the air. But the strokes cancel each other out, so the bird stays motionless.

Even hummingbirds that don't migrate with the changing seasons travel over a wide area, constantly searching for food. For its size, a tiny hummingbird requires astounding amounts of food. It must consume half its body weight in food each day - the equivalent of a full-grown man eating 300 hamburgers. To get what they need, hummingbirds feed throughout the day and often into dusk, when other birds have roosted for the night.

It was once thought that the birds lived entirely on flower nectar, but this isn't so. The sugary nectar provides a source of quick energy. That's essential for these active little birds, which burn up more energy than any other warm-blooded creature. But hummingbirds also need protein, and to get it they eat tiny insects and spiders. They lap up insects along with nectar or catch them in flight. They also pluck insects from leaves and spiders right from their webs, hovering in the air all the while.

Most kinds of hummingbirds raise several broods of young a year. The birds pair up briefly to mate, and the males leave the nest-building and child-raising chores to the females. For many hummingbird species, the nest is a tiny cup, no bigger than a walnut shell. Most are made of moss and plant fibers, bound together with strands of silk stolen from spider webs. The female lays two tiny eggs, and she raises her chicks on an insect diet. Hummingbirds will defend their nests with amazing courage, even driving off hawks many times their size.

Adult hummingbirds travel alone, rather than in flocks. And many are common visitors to gardens. When a bird finds a good feeding spot, with plenty of flowers, it will stake out a territory and guard it jealously, driving other hummingbirds away.

Hummingbirds can often be seen near water, enjoying frequent baths. Sometimes they almost seem to be playing as they splash about. Many are also uncommonly curious. They will fly up to explore anything, even a person's clothing, if it is brightly colored. The fact that they can speed away so quickly if danger threatens may account for their boldness. Hummingbirds do fall victim to predators, however. Other birds, frogs, and even predatory insects such as the praying mantis might eat them, perhaps mistaking the little birds for large insects.

The boldness and curiosity of hummingbirds only adds to their charm. When Spanish explorers arrived in the Caribbean, hummingbirds were among the wonders they reported. "The colors shine like those of the little birds artists paint to illuminate the margins of holy books," wrote one Spaniard. "They are hardy yet so little I would not dare tell of it if others had not seen them also."

Later, Europeans took a fancy to preserved hummingbirds, as ornaments on hats and other clothing. Thousands of the birds were killed. But today, people simply take delight in the beauty and charm of these fascinating and unique little birds. When a hummingbird visits the garden, it's always a welcome event. (Grolier Book of Knowledge Encyclopedia)